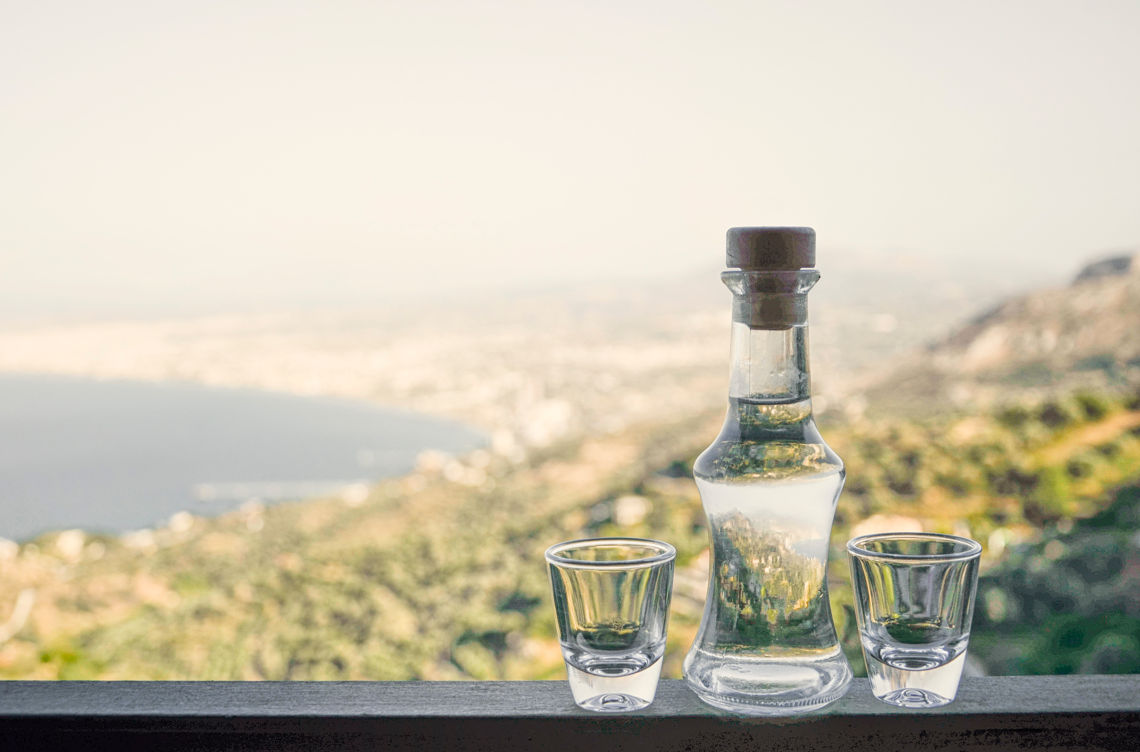 Ok. Its not an Actual rocket fuel, but it has all the potential to be one. Just ask anyone that has consumed a fair amount from the real thing…  Where real thing, is the local traditionally distilled raki reaching almost 50% alcohol and in some suicidal versions even 80%...

Raki or Tsikoudia (which is the actual term of the raki produced in Crete) is a very popular Balkan alcoholic drink. There are many variations of Raki but the Cretan Raki is a by-product of wine.  What is left from the pressed grapes (pomace) is left to simmer for a couple of months and then it is distilled to produce this amazing drink. Raki is straight, meaning no added sweeteners or flavours are added to the pomace.

There are some history records/legends suggesting that Raki was first produced around the 14th century on Mount Athos (not in Crete) by monks. It seems Cretans were more interested to drink Raki than documenting the thing.  Aristotelis, on the other hand, is referring to Raki (or Rax in ancient Greek) on some occasions, where we can safely assume that he was sober to do so. Raki was produced unlicensed until the 1920’s when the Cretan Prime Minister of Greece, Eleutherios Venizelos, passed a law to allow Cretan Farmers to produce Raki legally. This legislation system continues to apply untill today.

We will look into Raki Production as Cretans do. First thing is to call Kazanari (distiller) and book the distillery. Then call all your friends and family and invite them to the distillery. Do not worry about the food, it will be plenty… Everyone brings along generous amounts of meat, enough to feed the whole island. As for the drink, if you dare, don’t drink when a koupa (a full pint of wine or raki) is passed on to you. By the way, you have to drink it in one go…

For the rest of the world, the pomace is distilled twice to a maximum of 94.55% abv and is ready to be consumed. The more times raki is distilled the less the alcoholic percentage is. An easy drinking raki is around 35-38% alcohol.

After all the above, if you still want to drink raki, then you should drink raki straight. No ice, no beverages, and hell not, with another alcoholic drink. That is unless you are not suicidal. Since Raki is a strong drink it is often consumed as an aperitif (don’t mention this word to Cretans… ) or with a meze resembling 3-4 portions for regular people. Raki is served in shot glasses, but do not treat it as a shot. A few sips from the shot are acceptable, for a foreigner, in Cretan culture.

If you will ask a Cretan, Raki is the best medicine in the world, the most effective cold remedy, the best skin care product… and the list is endless. For most of the cases, there is a degree of truth, as Raki is high in alcohol. The most common Raki drinking variation and champion in treating cold, flu, cough etc is the Rakomelo. Rakemelo is made by boiling raki with honey(has to be Cretan Honey, otherwise its not good). Rakomelo is to be consumed hot or cold and is very popular among young people and women because is easier to drink. Rakomelo is a devious drink though, because it is sweat and easy to drink, you can get drunk pretty easily. Consume with caution unless you have a prescription for it. Also, you can use pure Raki for embrocation mainly in the chest and neck to treat cold and cough.

We assume that there is no real need to address this issue… The myth that says, you drive better after a couple of shots of Raki, is a Myth. Raki is harmless only when you fly a rocket to the space. In which case raki, is the fuel.

Never ever drink and drive!